Val Gardena is one of the valleys with ancient rhaetoromanic origins, deeply attached to its past, its traditions and its own language. The main township is Ortisei which, together with Selva and Santa Cristina, developed a flourishing artistic handcraft industry due to the orders which have come to their wood carvers from all over the world ever since 1700.

The first to carry out these orders, which were mainly for religious items (altarpieces, tryptiches, crucifixes, cribs, etc.), were members of the Vinatzer family and the Trebinger brothers who were soon joined by other carvers.
In almost every home men and women applied themselves to this occupation. The craft was perfected and noteworthy works of art were created so that many of the valley-dwellers saw their income increase considerably. Thus dealt with the economic problem caused by the wanting agricultural production, the wood carvers now needed easy routes of comunication for their commerce. This was provided, with help from the State, by the then Major of Ortisei, J. B. Purger (1869), with the construction of a road at the bottom of the valley which connected it with the regional capital. Professional and Art schools grew up alongside the numerous workshops and they represent the continuity of the technical and creative ability which this valley has cherished and which has made it famous and esteemed throughout the world.

In 1920 Leo Prinoth Sr. founded a wood-carving workshop called LEPI which still continues the same activity today.
At that time, the articles requested were mainly wooden appliances for various uses, buttons, letters of the alphabet, ornamental ciphres, brooches, bottle stoppers, weather houses, clock cases, grandfather clocks and the like. Soon after, profane and religious carvings were produced following the artistic lines of famous artists such as Kreuzer, Prugger, Nocker, Piccolruaz, Vallazza, Kaeser and Perathoner.
Weathered lime and stone pine was used and the results were remarkable. Besides the numerous typically folkloristic pieces, attention was increasing for religious figures and so of course the nativity crib became of greater interest.

Leo Prinoth Sr. was succeeded by his son Leo Prinoth Jr. who carries on his father’s business and has kept the company name LEPI. The company has developed greatly and prides itself on its rich range of production; due to the attention given to quality it has gained an increase of 90% in its export.

It is thanks to Leo Prinoth Jr., who has entrusted artists such as Rupert, Reindl and Giner with the design of crib pieces as models for the new production line, that there is renewed interest in the crib and the desire to represent it with new and different distinctive traits and features.

It is worth noting that the various compositions can be modified and enlarged to a maximum of 100 figures as in the 9 versions already created.

So originates a woodcarving 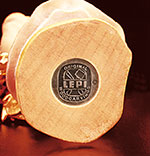 Certificate of Authenticity: By buying one of these woodcarvings you will have acquired an artistic object of value which has been handmade in the LEPI workshops after the original models made by famous ancient masters. Our LEPI signature and trademark is a guarantee.